skip to main | skip to sidebar

Bal Mandir Revisited – Be careful what you wish for!

As many of you know, we had to cancel our planned project to take over the management of Bal Mandir Children’s Home late last year and we were very disappointed as it was a fantastic opportunity for both Mitrataa and for the children and staff at Bal Mandir, as well as for the head organisation, Nepal Children’s Organisation. We continued to work closely with the 40 Dream Catchers’ girls at Bal Mandir, the Project Snow Leopard girls and the Mitrataa Rising Stars Child Club, including on their recent Nepali New Years Eve Party to support them as best we could. 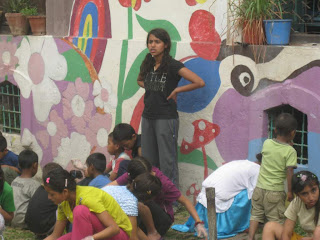 Well, very unexpectedly but excitingly, NCO approached us in late April with a revised proposal which overcame our major concerns when we walked away from the project earlier. So officially from 1 May 2011, Mitrataa took over the management of Bal Mandir, Naxal Children’s Home, with 250 children (aged from 15 days to 16 years) for 5 years with the view to set up a sustainable model and a world class children’s home. 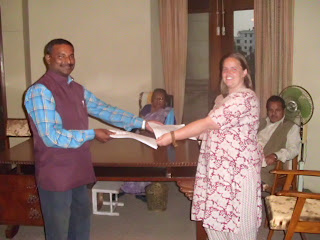 We are under no illusion that this will be a challenging project but we are very excited about the possibilities. Rather than feeling despair at the challenges and lack of progress for the children, we are now able to really focus on the possibilities and the opportunities ahead to create real, sustainable change, not just for the current 250 children and 35 staff but for future generations as well as for the children in NCO’s 10 other homes and potentially for the 600 other children’s homes in Nepal. The opportunity is fantastic and we are honoured and humbled to be able to take on this challenge.

The project is a very strong fit with Mitrataa’s core values of creating sustainable models to development through a train-the-trainer approach. We will also be able to use our learnings from our existing projects such as our Dream Centres project – we will be setting up a Dream Centre within Bal Mandir – our Daisy Chains program which we will be running for the house mothers and our model school approach where we will be using our experience and trainers to help train tutors and other teachers at Bal Mandir. 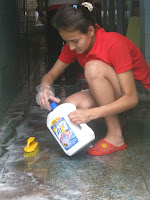 Since the handover on 1 May, we have been busy with a number of exciting initiatives:

·         Clean Up Day! - As any of you who have visited Bal Mandir know, it needs a bit of love and attention! It is housed in a beautiful old Rana Palace and is an incredible building. But it has been left uncared for for a very long time and it is very run down. So we had a huge clean up day on which we scrubbed the place from top to bottom – every inch has been scrubbed, debugged and disinfected. The campaign was led by the Child Club, in particular by Asbini who was boss for the day. Asbini, Saraswoti and Sabitri Thapa in particular showed amazing leadership skills in organising everyone. The kids all got involved and were already well into the clean up when we arrived having been up since the crack of dawn! The house mothers were all cleaning madly too. We definitely have a long way to go with getting the place clean and tidy but the best thing was that the kids and the house mothers all got in and were so excited to be taking pride in their home. The day created a real sense of community and we were so grateful that some of our core supporters attended – Dinesh from Creating Possibilities (supported by Bruce and Susan Keenan’s Himalayan Children’s Charities) sent his team of children who had all lived at Bal Mandir at one stage, the girls from NGCC who all grew up at Bal Mandir and moved to NGCC when they finished school came, and Arun, a wonderful woman who was adopted from Bal Mandir 20 years ago and who is back at the moment visiting and providing support to Bal Mandir came with a crowd of people. We also had a couple of Aussies who joined us as well as our great volunteer, Fleur (more on her later!). It was a fantastic day, the energy was amazing and I was so proud of everyone. We had a party in the evening with lots of dancing and singing and celebrations too. We have a long way to go with the cleaning but it’s a start! 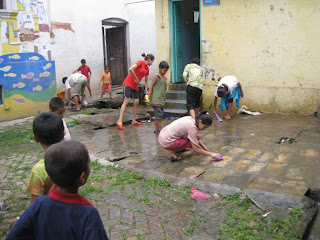 ·         Listening and Learning – We didn’t want to make too many changes to start but we wanted to really listen and learn from the staff, the children and other stakeholders first. So we have been spending time one-on-one with all of the house mothers and other staff. This has been a fantastic opportunity and we are very grateful that they have been so supportive and open to Mitrataa’s management of the home. As we finish these meetings, we will be preparing our strategic plan to move things forward.

·         Establishing the Management Committee – As this project is a 5 year plan and sustainability is at its core, it is very important that we work closely with NCO. So we have established a Management Committee with 2 NCO members and 3 Mitrataa members to help us share experiences and to guide the overall strategy of the project. The day to day management, responsibility and costs of the home rest with Mitrataa. We are really pleased with NCO’s willingness to listen and learn in the initial stages of the project and we are confident of being able to deliver our objectives with the support of the NCO board.

·         Schools – The new school session started in Nepal in April and due to lack of funds, many of the kids were not enrolled in school or didn’t have their uniforms and books so weren’t attending school. We have now resolved this and all the kids are happily in school and studying hard! We are putting in place a tutoring/homework system to ensure they get the support they need to really achieve their goals in their studies.

·         Nutrition – Milk, eggs, meat and fruit had been removed from the menu for the last several months due to funding issues. The first thing we did was reinstate these very important items onto the menu as the kids need these to grow big and strong! I have never seen 250 kids so excited as when they found they had an egg for breakfast last week! Their smiles were enormous!

So it’s exciting times ahead! To all of you who offered to help us fundraise for this huge project last year, thank you. We now really need you! Feeding and educating and housing 250 kids and 35 staff costs a lot of money and we are about to kick off a huge fundraising drive. So please get involved and support us as we begin to really change the lives of these kids. There will soon be a fundraising info pack available on our website which will have a bit more information for you and how your money will be spent. 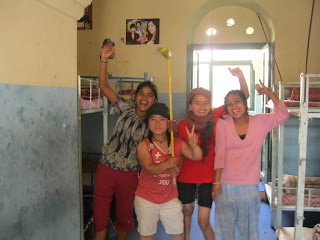 On behalf of the wonderful kids at Bal Mandir, thank you so much in advance for your support and we look forward to updating you on our progress!
Posted by Adam Ordish at 20:54

This is great. I love to see Balmandir cleane and the children happy.
Anna-lena Henriksson,sweden
Initiator of NGCC

You guys are doing amazing work...and we are happy being part of it...
Dinesh

Aug 01 2011 - Public accounts committee of legislative Parliament has ordered Nepal children's organization to give public land on lease only after forming a necessary guideline and working procedure. Officials of Nepal children's Organization told the committee that the organsiation is looking after the orphans and children from the monthly rent of the land. The organization was questioned over the allegation that the organsiation is randomly leasing land in its name in the capital and other places. The organization is feeding some 6 hundred children across the country and it raises about 10.5 million rupees as rent against the land lease. The committee was told that several of the earlier contracts were dissolved following the directives of the commission for the investigation of abuse of authority-CIAA.

The Public Accounts Committee (PAC) of the legislature parliament has directed Nepal Children's Organisation (NCO) to stop leasing its lands in various places in Kathmandu valley based on verbal contract only and follow the government prescribed procedure for the leasing.

PAC concluded at a meeting on Sunday that there was huge difference in the rent of the land plots leased out on competition and those without competition.

NCO has been leasing out 57 Ropanis (about 3 hectares) of land in various prime locations in the capital. Out of 57 Ropanis of land a little more than 9 Ropanis in Naxal has been leased to the education ministry without contract and without any rent.

PAC has directed the NCO to lease out land only through competition and also take rent from the education ministry for the use of land in Naxal.

Nice information..its a valuable.Thanks for sharing.
Sponsor a child in need
Donate to children in need

Promote your Page too